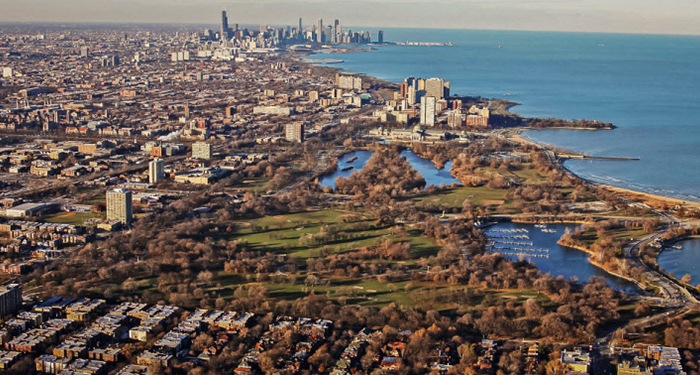 An aerial view of Jackson Park. Historically, Natalie Moore writes, Chicago’s South Side has been much more a subject of the arts than the West Side. | Lee Hogan/Sun-Times library

Hull House Director Jennifer Scott of UIC who came up with and hosted a forum called West Side/South Side: Bridging the Divide, with folks representing both sides of town via their civic engagement or activism is mentioned in a Chicago Sun-Times column by WBEZ’s Natalie Moore.

The forum was the brainchild of museum director Jennifer Scott, who is spearheading the series Making the West Side, a multiyear project through the National Endowment for the Humanities that brings together scholars, activists and neighbors to investigate the connections of neighborhood history to neighborhood change.

Much of the sentiment on stage and expressed in the audience was that West and South Siders suffered from failed political leadership and steady lack of economic development. What we didn’t delve into are the class divides that haunt both sides of town. The established narrative is that South Siders think they are better than West Siders; snooty South Siders view West Siders as ghetto hayseeds. Then there’s the playful rivalry over whose blues and stepper sets are better.