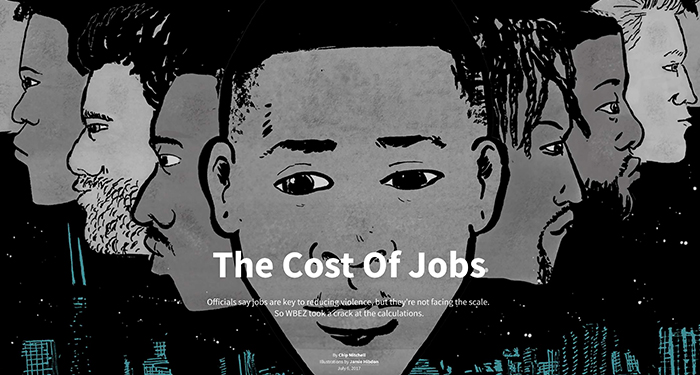 Matthew Wilson, economic development planner with the UIC Great Cities Institute, assisted with a Chicago Public Media (WBEZ-FM 91.5) interactive online story estimating the number of full-time, year-round jobs needed in a program that would eliminate a significant amount of violence in Chicago. This story, which is part of WBEZ’s Every Other Hour project, also features input from Joseph Persky, a UIC professor of economics, who helped come up with a combination of government strategies that might be feasible, and a quote from Teresa Córdova, director of the institute.

To come up with the number of full-time, year-round jobs in a program that would eliminate a significant amount of violence, we crunched numbers with Matthew Wilson, an economic-development planner at the University of Illinois at Chicago’s Great Cities Institute, which has been doing research on employment and poverty.

First we identified a group that makes up just 4 percent of Chicago’s population but accounts for roughly half of the city’s shooting victims this year — and potentially half the assailants. That group consists of males, ages 16 to 34, in 26 of the city’s 77 community areas.

Then we used U.S. Census Bureau estimates to find out roughly how many members of this group are out of school and out of work. That number is 32,656. To keep the math simple, we rounded it down to 30,000. That’s how many jobs might be needed to take a big bite out of Chicago’s violence.