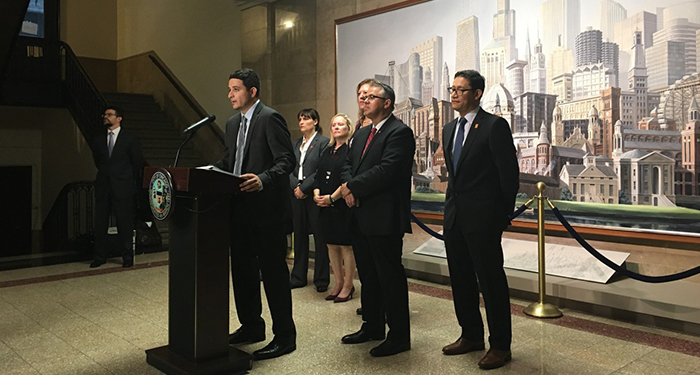 Report author José Acosta-Córdova said that Latinos lag behind other groups when it comes to homeownership and education. PHOTO: MAURICIO PEÑA, CHICAGO MAGAZINE

We were very proud to collaborate with the Institute for Research on Race and Public Policy (IRRPP) to produce a report for Metropolitan Family Services on Chicago’s Latino neighborhoods. On October 11, 2017, The Chicago City Council Latino Caucus, led by Alderman Gilbert Villegas, held a Press Conference to Announce the Release of the report titled: The Latino Neighborhoods Report: Issues and Prospects for Chicago.

The report, based primarily on U.S. Census data, provided citywide data and focused on twelve neighborhoods with at least 25,000 Latino residents where they are the largest single group. The author of the report, José Miguel Acosta-Córdova, is a research assistant for IRRPP, a Master’s student in UIC’s Urban Planning and Policy Program, is President of LPODER (Latino Planning Organization for Development, Education and Regeneration) and is also a James J. Stukel Student Fellow with the Great Cities Institute. It was our pleasure, as part of the James J. Stukel Fellows Program and our mentorship work with students, to assist in making this research more widely available.

The following is taken directly from the report:

Among the report’s findings:

This data suggest directions for policy makers. The increasing Latino population is critical to the future of the region. It will be beneficial for the city of Chicago to enact policies and allocate resources to enhance successful strategies and meet critical challenges, particularly in the areas of direct services, education, and employment opportunities that will more effectively integrate Latinos into the formal political, social, and economic fabric of the City.

In the final section, “Issues and Prospects Facing Latinos in Chicago” applying the data, the report addresses education, household income and poverty, employment and industry, homeownership, and health coverage.

A range of media outlets have written about The Latino Neighborhoods Report: