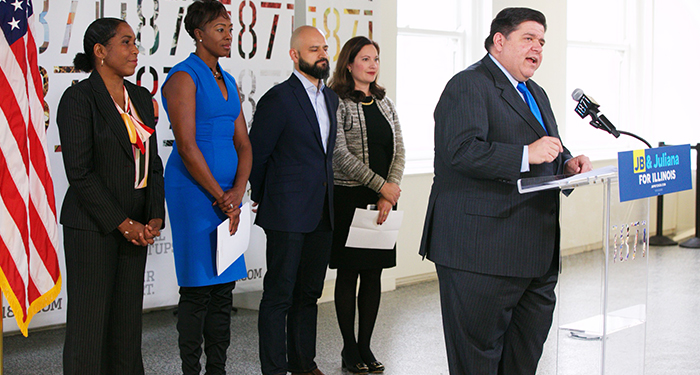 Governor-elect JB Pritzker and Lieutenant Governor-elect Juliana Stratton announced the formation and members of the transition’s Job Creation and Economic Opportunity Committee at 1871 on December 3, 2018.

When J.B. Pritzker is sworn into office on Monday morning, January 14th, he will deliver a speech that will include ideas from the transition committees that he and Lieutenant Governor-Elect Juliana Stratton established to provide input to their administration.  GCI Director, Teresa Córdova serves on their Job Creation and Economic Opportunity transition committee to generate suggestions for good policies that will result in a strong economy.

At the December 3, 2018 announcement of the Committee, held at the tech-incubator, 1871, Lieutenant Governor-Elect, Juliana Stratton, who spoke after the Governor-Elect, made the following statement:

For all of the strategic advantages our state has, job growth has been too slow and economic opportunity has been shut out for far too many, but this committee will work to change that. Like a rising tide lifts all boats, our plans to create jobs must be inclusive and make Illinois work for every family. Our committee members represent the diversity of our great state and together we’re going to put forward real ideas to begin rebuilding our economy on day one in office.

As in all of the transition committees, they were bi-partisan and included individuals from throughout the state of Illinois including elected officials from all level of government.  The Restorative Justice and Safe Communities Committee included two members from UIC:  Jason Stamps, Acting Director of the Center for Public Safety and Justice in the College of Urban Planning and Policy Jason Stamps and Joseph Strickland, Associate Director & Senior Researcher, Jane Addams School of Social Work Center for Social Policy and Research.  Chancellor Michael Amiridis was named to the Educational Success Committee.

It was a busy semester at the Great Cities Institute. Director Córdova spoke at the World Trade Organization (WTO) in Geneva, Switzerland at The Public Forum on a panel hosted by Ecuador’s Ambassador Permanente to the WTO, Diego Aulestia Valencia, on “International Trade, Technological Change, and Development:  The Role of Social Policy.”  As a guest of the Ambassador, she had the opportunity to attend a session (and later a panel) of UN delegates from developing nations that participate in the United National Conference on Trade and Development (UNCTAD) where they released their very interesting Trade and Development Report.

As part of a World Chicago program, she also recently traveled to the Balkans to Slovenia and Macedonia where she met with individuals from local business schools, design and planning institutes, high tech incubators, and local entrepreneurs on topics of high tech innovation and entrepreneurship.  She delivered a keynote speech at the Conference on Youth Entrepreneurship at the Technology Park in Ljubljana, Slovenia.  She also spoke on Doing Business in a Data-Driven Society, a Business Summit sponsored by CREED Macedonia, World Chicago and the U.S. Department of State.

In October, Teresa also participated with Andrew Stetner from The Century Foundation on a panel on “Manufacturing’s rebound:  Analyzing the effectiveness of state industrial policy in creating equitable access to good jobs,” at the 2018 conference held here in Chicago of the Economic Analysis and Research Network (EARN).

On November 28th, Dr. Córdova had the honor of participating on a panel, “Race and Ownership in Manufacturing,” with Dr. Byron Brazier (Pastor of Woodlawn’s Apostolic Church), Colin Cosgrove (President of Laystrom Manufacturing), Dr. Harry Alston (Safer Foundation), moderated by David Robinson (Manufacturing Renaissance). The event was sponsored by Chicagoland Manufacturing Renaissance Council and held at the Freedman Seating Company on Chicago’s West Side.

We continue to work on research and projects related to inclusiveness in the economy.  We are finishing up our reports for some of our partners on succession and ownership, corporate inclusiveness, worker cooperatives and job generation.

We are looking forward to another productive year and want you to know that we appreciate your support and interest in our work.