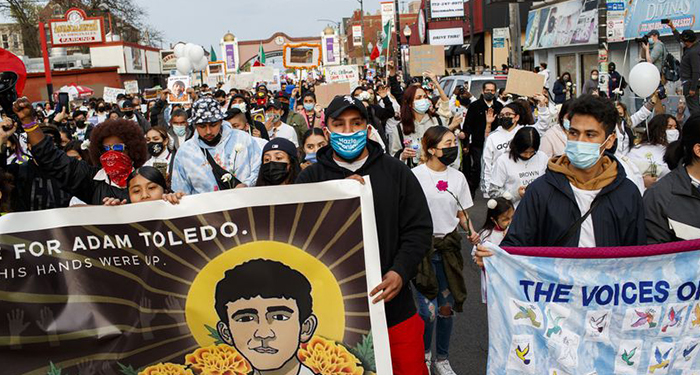 Relatives, supporters, and members of the community march on April 18, 2021, during a peace walk for 13-year-old Adam Toledo who was shot and killed by a Chicago police officer during a foot pursuit. (Armando L. Sanchez / Chicago Tribune)

Data on youth joblessness from the Latino Neighborhoods Report is cited in a story on youth in Chicago in the wake of the police killing of Adam Toledo.

In 2014, Little Village Youth Safety Network and Enlace published research that identified Little Village as the neighborhood with the highest number of “disconnected youth,” defined as young residents ages 16-19 at the intersection of being unemployed and out of school. In 2017, the University of Illinois at Chicago’s Greater Cities Institute found that 71% of Little Village residents between the ages of 16 and 24 were jobless.