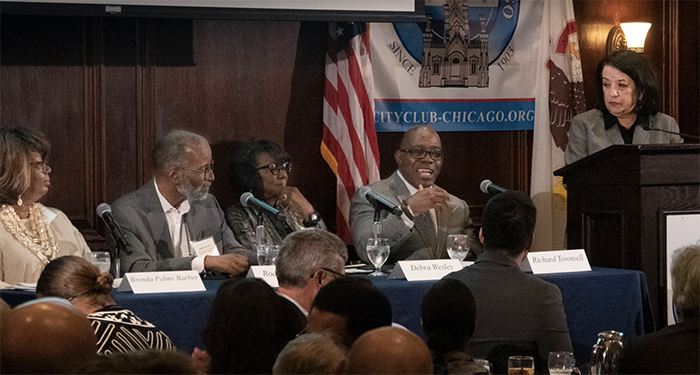 Most important to the Great Cities Institute is our ability to serve Chicago and its communities by harnessing the power of research through strategic engagement.  A recent example of such engagement is the production of Lawndale Service Area Databook that we produced for/with the Lawndale Christian Development Corporation and presented at the Chicago City Club on Monday, April 25th.  The City Club event included a presentation of the data by our Director, Teresa Córdova and panel of North Lawndale Community Leaders: Dr. Teresa Córdova Rodney Brown, Brenda Palms Barber, Richard Townsell, Debra Wesley. The event and the report have received media coverage in the Chicago Sun Times, the Chicago Tribune, Block Club, NBC Chicago, WBEZ, and WVON, including columns from the editorial boards of both the Tribune and the Sun Times. The editorial from the Sun Times Editorial Board, which featured the Great Cities Institute report, appeared in Wednesday, April 27th’ paper and stated:

The findings are valuable —and should be studied — by city planners, business owners or anyone interested in revitalizing North Lawndale and similar neighborhoods that are wrongly seen as too poor to support proper economic development.

The Databook identifies trends of wealth leakage and employment/education mismatch and argues for investment that benefits the residents.

Some major trends identified in the Lawndale Service Area Databook are that: