Gangs On Trial: A Conversation with John Hagedorn 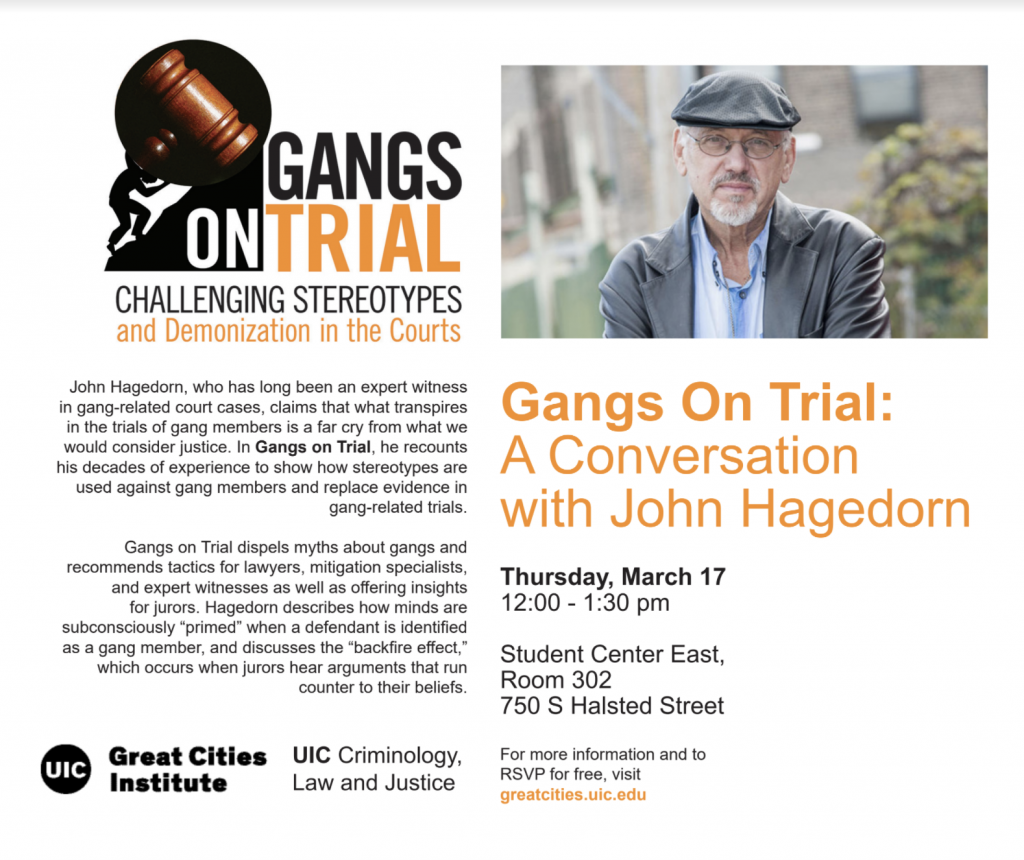 John Hagedorn, who has long been an expert witness in gang-related court cases, claims that what transpires in the trials of gang members is a far cry from what we would consider justice. In Gangs on Trial, he recounts his decades of experience to show how stereotypes are used against gang members and replace evidence in gang-related trials.

Gangs on Trial dispels myths about gangs and recommends tactics for lawyers, mitigation specialists, and expert witnesses as well as offering insights for jurors. Hagedorn describes how minds are subconsciously “primed” when a defendant is identified as a gang member, and discusses the “backfire effect,” which occurs when jurors hear arguments that run counter to their beliefs.

John Hagedorn, Ph.D. is a James J. Stukel Fellow with the Great Cities Institute and Professor Emeritus of Criminology, Law, and Justice at the University of Illinois at Chicago. Hagedorn’s first book, People & Folks, Gangs, Crime, and the Underclass in a Rustbelt City, argued for more jobs than jails and applied William Julius Wilson’s underclass theory to gangs. He was the architect of a neighborhood-based, family centered social service reform in Milwaukee that became the subject of his dissertation, published as Forsaking Our Children: Bureaucracy and Reform in the Child Welfare System (1995). He was editor (with Meda Chesney-Lind), of Female Gangs in America: Essays on Girls, Gangs, and Gender, the only edited volume ever published in the U.S. on female gangs.

His interest in Chicago gangs led him to become immersed in the history of the Vice Lords and the importance of race. His global travels further informed his understanding of gangs, which led him to edit the volume Gangs in the Global City based on an international conference at the Great Cities Institute. He was Principal Investigator of a Harry F. Guggenheim study at the Great Cities Institute of why Chicago’s homicide rate did not decline like New York City’s. He argued in 2007 that the decision to not invest in public housing but demolish it was a major correlate of high rates of violence.  In A World of Gangs (2008), he applied Manuel Castells’ work in analyzing gangs, arguing that understanding the cultural struggle for identity was crucial in working with gangs. His 2015 book, The In$ane Chicago Way: The Daring Plan by Chicago Gangs to Create a Spanish Mafia, looks historically at gangs, organized crime, and corruption in Chicago.

To attend the event virtually, please click this link.

The event is free, but registration is required to attend.