POSTPONED: Views from the Streets: The Transformation of Gangs and Violence on Chicago’s South Side

This event has been postponed. A new date will be announced at a later time. 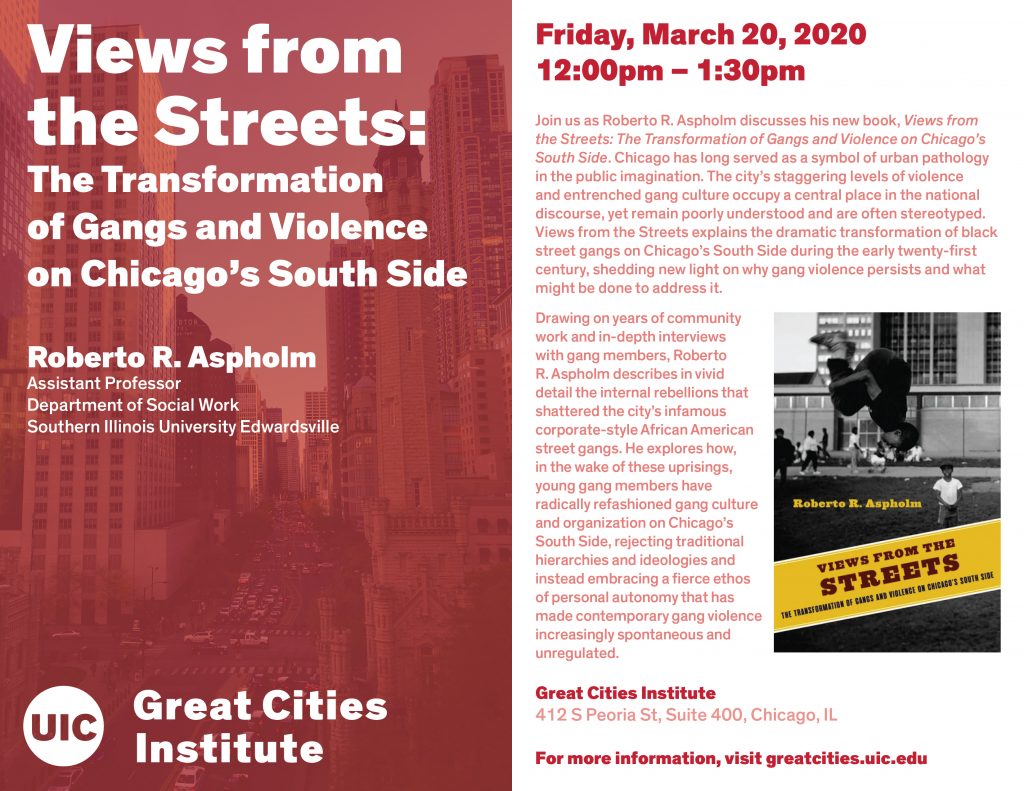 Join us as Roberto R. Aspholm discusses his new book, Views from the Streets: The Transformation of Gangs and Violence on Chicago’s South Side. Chicago has long served as a symbol of urban pathology in the public imagination. The city’s staggering levels of violence and entrenched gang culture occupy a central place in the national discourse, yet remain poorly understood and are often stereotyped. Views from the Streets explains the dramatic transformation of black street gangs on Chicago’s South Side during the early twenty-first century, shedding new light on why gang violence persists and what might be done to address it.

Drawing on years of community work and in-depth interviews with gang members, Roberto R. Aspholm describes in vivid detail the internal rebellions that shattered the city’s infamous corporate-style African American street gangs. He explores how, in the wake of these uprisings, young gang members have radically refashioned gang culture and organization on Chicago’s South Side, rejecting traditional hierarchies and ideologies and instead embracing a fierce ethos of personal autonomy that has made contemporary gang violence increasingly spontaneous and unregulated. In calling attention to the historical context of these issues and to the elements of resistance embedded in Chicago’s contemporary gang culture, Aspholm challenges conventional views of gang members as inherently pathological. He critically analyzes highly touted “universal” violence prevention strategies, depicting street-level realities to illuminate why they have ultimately failed to reduce levels of bloodshed. An unprecedented analysis of the nature and meaning of gang violence, Views from the Streets proposes an alternative framework for addressing the seemingly intractable issues of inequality, despair, and violence in Chicago.