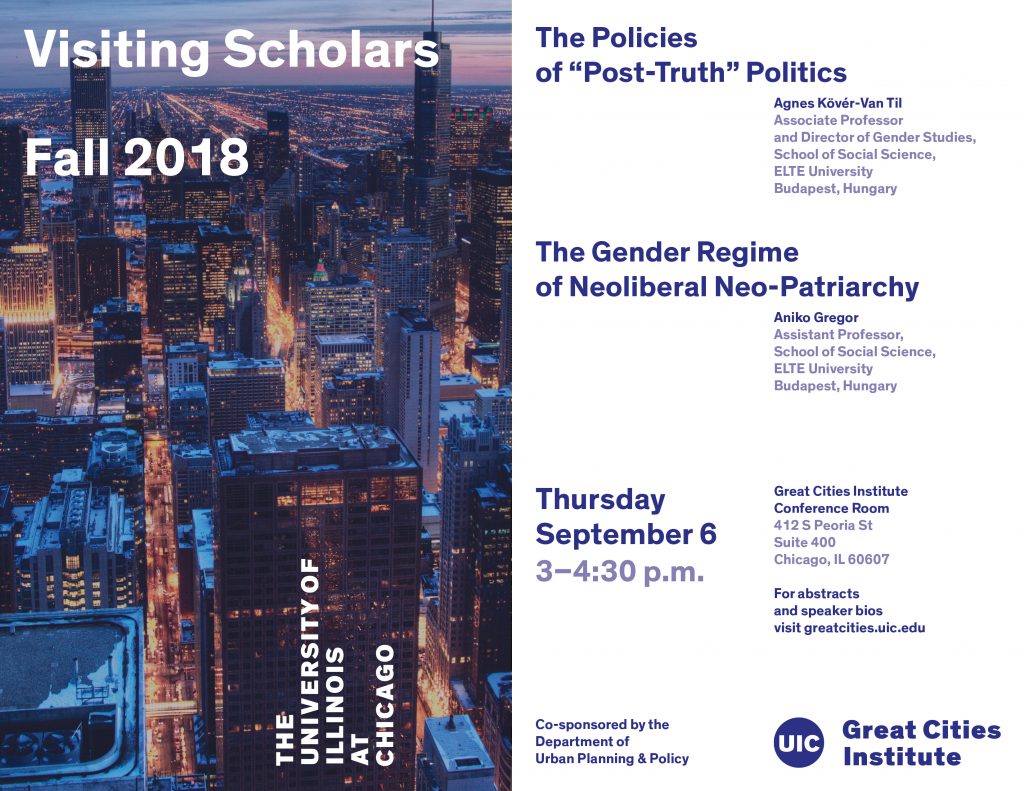 This visiting scholars’ lecture is co-sponsored by the Department of Urban Planning & Policy.

The Policies of “Post-Truth” Politics

“Post-truth” is an adjective defined by the  Oxford Dictionary as ‘denoting circumstances in which objective facts are less influential in shaping public opinion than appeals to emotion and personal belief’. I decided to use this expression as the title of my lecture since it is my impression that this reflects more or less (rather more than less) satisfactorily our current political environment and experiences. The mind boggles when one tries to decode the triumph of political actions such as building walls and fences at borders. Or cutting taxes to make the rich richer and cutting public services to make the poor poorer. Or well rewarded governmental acts like undermining judicial independence. Or even banning university courses and programs. Or building successful election campaigns on images of evil immigrants in a country where there are nearly no immigrants at all. The concept of post-truth politics permits us to unravel the growing irrationality which increasingly underlies prevailing political regimes on both sides of the Atlantic Ocean.

Agnes Kover-Van Til is a lawyer and sociologist, associate professor and director of Gender Studies MA Program at ELTE University School of Social Science, Budapest, Hungary where she teaches social law, labor market policy and gender discourse analysis.  She has a distinguished career as a nonprofit organization executive and human rights lawyer in Hungary.  She is the author or editor of several books and numerous articles on such topics as gender discourses, equal treatment and opportunities and minority rights, prisoner’s rights, and the theory and practice of social welfare.  She has served as program associate director of the European Union’s Intensive (international) Program, and before that was Executive Director of the ELTE Legal Clinic program.

The Gender Regime of Neoliberal Neo-Patriarchy

In their recent article about the gendered aspects of transitions of Hungary and Poland to illiberal democracies, Pető and Grzebalska (2018) convincingly argues that one of the reasons behind the emergence of illiberalism is the ineffectiveness of the narrow emancipatory and equality politics. For example, a mainstream liberator idea is that labor market participation of women is a direct path to their emancipation. However, by not taking into consideration the class differences among women and the difference of the quality of the available jobs, it could easily lead to the refusal of the idea of equality politics among the growing number of those being in precarious conditions.

By applying the concept of “neoliberal neo-patriarchy” (Campbell 2014) we are going to present that the illiberal state can play an active role in both promoting neoliberal policies and patriarchal relations. Strengthening the patriarchal notion of families with gendered division of labor between men and women might be easier supported if the working conditions of women is worse (and getting worse), hence the sphere of family is desired as a shelter from exploitative labor market. Similarly, gendered consequences of reduction of welfare services and budget in the name of neoliberal austerity policies will push the unprovided carework back to the sphere of families where mostly women are going to provide them.

Anikó Gregor is an assistant professor at University ELTE, Faculty of Social Sciences, where she delivers quantitative and qualitative research methodology courses. In research, she focuses on the sociology of  gender. She is the author or co-author of a number of studies examining relations of neoliberalism, feminism and the system of gender inequalities. Earlier she was in charge of a research group at ELTE, which examined the presence of sexism and sexual violence myths as well as the experience of sexual or other sexual-based forms of violence among the students of the university.