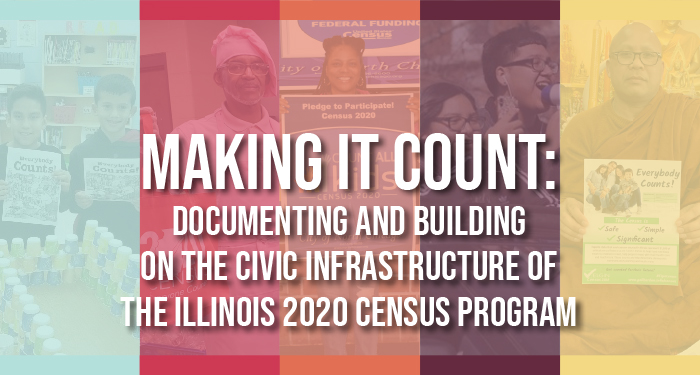 This report titled, Making It Count: Documenting and Building on the Civic Infrastructure of the Illinois 2020 Census Program, was a collaborative effort of the University of Illinois at Chicago’s Department of Public Administration Census Team (UIC DPA Census Team), UIC Great Cities Institute, Rob Paral & Associates, the Census Office, and Regional Intermediaries.

The IDHS Illinois 2020 Census Grant Program was unique for a variety of reasons, most notably its use of the networked governance model, colloquially referred to as the hub-and-spoke model, mobilizing over 400 organizations across the State to engage in census outreach. Through the 2020 Census Project alone, IDHS was able to build an extremely complex and immersive civic infrastructure that touches on all aspects of Illinoisans lives – from local government, to community organizations, to health departments.

The report documents the entire scope of the Illinois 2020 Census Project, including the timeline, project challenges, actors, response rates, successful strategies, and more. Going a step further, the report also identifies recommendations for the future, including a proposed timeline. It was imperative that these efforts be formatted in a way to serve as a baseline for future civic engagement initiatives as well as the 2030 census.

Amidst recovery from the COVID-19 pandemic and a mass exodus of residents leaving the state, it is clear that tapping into this already established infrastructure and continuing to engage local organizations across Illinois will be critical in regaining the lost political representation and federal funding Illinoisans so desperately need. Though using the Illinois 2020 Census network and investing in small projects over the course of the next 10 years, Illinois can reclaim what was lost and achieve even higher than our previous standard.

A link to the report can be found here. The supplementary digital archive of all Illinois 2020 Census reports, documents, and videos can be found at www.definingourdecade.org. For further information on the intricacies and results of the project, Dr. Kathleen Yang-Clayton can be contacted at kyclaytn@uic.edu.

The United States Constitution mandates that every person living in the United States be counted to ensure fair distribution of resources and political representation.  An accurate and complete count of Illinois’ population is, therefore, crucial for three reasons. First, Census numbers determine the amount of federal dollars that states receive to help administer public programs and services. Second,  the critical demographic data provided by the Census is used to inform policy decisions for the subsequent 10 years. Third, Census data is used to determine the apportionment of U.S. Representatives across the states.

In promoting the 2020 Census count, Illinois was faced with the difficulties of reaching a wide range of communities, including urban, suburban and rural areas with extremely different levels of income, many different types of housing, varying citizenship statuses, multiple home languages, and a wide range of other social and economic characteristics.  Achieving a successful Census of the state’s 4.8 million households was a substantial undertaking requiring mobilization of stakeholders across the state.  Thanks to the combined efforts of state and municipal governments, nonprofit organizations and philanthropies across Illinois, as well as an unprecedented state investment in public outreach, Illinois’s 2020 response surpassed its 2010 response. Importantly, while the state’s average self-response rates consistently ranked among the highest in the nation, there were major disparities across the state.

The IDHS Illinois 2020 Census Grant Program was a statewide outreach effort to prioritize the hardest-to-count Illinoisans in the Census numbers. As an innovative strategy, the state implemented a networked governance model, often referred to as a “hub and spoke” model, which focused on convening partners called Regional Intermediaries (RIs) anchoring regions across the state that, in turn, supported networks of Subrecipients (SRs) with deep roots within many local communities. The state’s efforts focused on:

In preparation for the Census count in 2030, as well as in an effort to inform future civic engagement initiatives, the recommendations in this report focus on how the state can learn immediate and long-term lessons on how to effectively engage with the broader public in addition to hard-to-count communities (HTCs) across the state. Key to the IDHS Illinois 2020 Census Grant Program was an established network of diverse organizational partners from social services, nonprofit, municipal governments, large public agencies, libraries and public health organizations. It is critical to continue to leverage this initial investment so that gains in new partnerships, innovations and capacity do not diminish between 2020 and 2030. The general consensus among IDHS and the Regional Intermediaries (RIs) was that the networked governance model (colloquially referred to as hub and spoke) was the proper approach for the Illinois 2020 Census outreach initiative. Challenges with the networked governance approach were mostly the result of insufficient time to plan.

Therefore, the immediate lessons learned from the Illinois 2020 Census Grant Program are relevant and actionable today. With respect to constructing a comprehensive and effective outreach effort towards the 2030 Census, this report presents feedback and practices that strongly encourage the following:

Strengthening the public’s trust in government is as urgent today as it will be in 10 years.