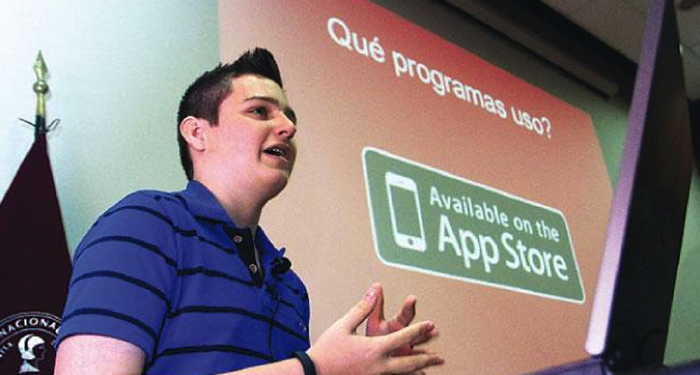 Michael Sayman started creating apps when he turned 13. Now 17 years old, he recently received media attention for creating the iOS app 4Snaps. 4Snaps is word app where users are given a word, and are then supposed to “snap” four pictures to have friends guess what the word is. Aside from his age, and the fact that he taught himself how to create apps on his own, he has been receiving media attention for the immense amount of perseverance he has demonstrated at such a young age. The most astounding detail of Michael’s story is that after his father lost his job, and their family home was about to go into foreclosure, he began assisting his parents with their mortgage payments at the age of 16. He began to think of his hobby as a source of income and developed business skills such as marketing and advertising strategy on his own. This thinking process is what some researchers have called an “entrepreneurial mindset.”

One pressing issue in academic settings is if the skills Michael developed can be taught. Integral Assets Consulting drafted a report that examined various youth entrepreneurship programs in the nation. They found that most entrepreneurship programs could be categorized into three main types of programs: programs that emphasize an academic curriculum, project based learning and skills outcome, and business plan design and business operations. Programs that emphasize an academic curriculum tend to use entrepreneurship as a hook for teaching math, communication skills, and financial literacy. Improving academic outcomes at school and college-bound expectations are the main goals in this program model. Project based learning programs tend to favor development of technical and life skills. Students are expected to complete a project, which is usually assigned, and learn the process of planning and operating a business project. The type of life skills developed varies on what each program emphasizes, and some examples include creative exploration, communication, and leadership development. Business plan and operations programs are a mix of the latter two, but emphasize the ideation of a new business project. It also teaches the elements of drafting a business plan and financial planning, which is why many think of this program model as the mini-MBA approach. These program models are not usually rigid, and most are a mix of the three. So what type of programs would have best catered to someone like Michael Sayman?

Michael Sayman created his 4Snaps app after he saw his sister playing a word game with one of her friends. When Michael saw the digital reproducibility of this, he knew it had the potential to become a popular game app. As he said, “I knew this was going to be a huge app, I knew it because my sister liked it before it even existed.” Michael found a way to market his app by learning from his sister’s activities. Michael’s sister showed him Instagram accounts of fashion Instagrammers who had large established followers. She pointed out that these fashion Instagrammers would often have ads on their accounts. Michael designed an advertisement that made users think they were already playing his word game 4Snaps. The ads he purchased on the accounts of popular fashion Instagrammers netted the surge in followers he needed to popularize his 4Snaps app. A project based learning program would have taught Michael the technical skill of app development. However, a business plan and operations program would have taught Michael the advertising and marketing of his product after it was completed. A program that combined both the goals of project based learning and business plan and operations would have benefitted someone like Michael the most.

Within Chicago, there are several programs that are currently trying to combine technological exploration with entrepreneurship education. Two such programs are the Westside Youth Technical Entrepreneurship Center in Garfield Park and the Best Buy Teen Tech Center in Bronzeville. Both centers offer students access to various technological resources, and mentors that guide youth in exploring robotics, design, coding, etc. The entrepreneurship element is provided in both instances by the Intel Computer Clubhouse, which provides the base curriculum. The Chicago region also has youth entrepreneurship programs that focus mostly on the business development side such as the Youth Investor Project organized by the Chicago Urban League and the Young Entrepreneur Program (YEP) organized by the James R. Jordan Foundation. Both projects end in the development of a business plan and a presentation on the business project. There are a multitude of youth entrepreneurship programs in Chicago with specific strengths, and current academic studies are underway examining if a program’s goals match its outcomes.

About the Author:Alexander Linares, GCI Research Assistant: is a second-year MUPP, with a focus on Economic Development.

Deamicis, Carmel. (2014). How a Florida kid’s “stupid app” saved his family’s home and landed him on the main stage at Facebook. Pando Daily. Retrieved from http://pando.com/2014/04/30/how-a-florida-kids-stupid-app-saved-his-familys-home-and-landed-him-on-the-main-stage-of-facebooks-f8/ Date Accessed: 07/07/2014.

Deamicis, Carmel. (2014). How a Florida kid’s “stupid app” saved his family’s home and landed him on the main stage at Facebook. Pando Daily. Retrieved from http://pando.com/2014/04/30/how-a-florida-kids-stupid-app-saved-his-familys-home-and-landed-him-on-the-main-stage-of-facebooks-f8/ Date Accessed: 07/07/2014.