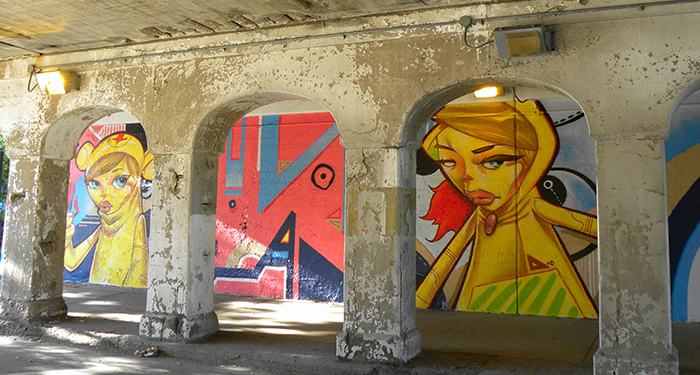 If you say “viaduct” to most people, it brings to mind graceful arched bridges carrying trains across green valleys. Say it to a Chicagoan, and it evokes an image that is quite different. We know that a viaduct is one of our city’s many grey, dingy underpasses, with Metra or CTA trains rumbling overhead, shaking loose chunks of disintegrating concrete onto our heads. In the city’s 49th Ward, however, residents are forming a different image of what a viaduct can be in this city. Thanks to the Participatory Budgeting process in that ward, some viaducts have been transformed into grand canvasses where art thrives.

The project to paint murals on 20 of the ward’s viaducts came about as part of the 2012 Participatory Budgeting cycle. The initiative, proposed and refined by community residents, appeared on the ballot as “Art = Rogers Park.” The initiative proposed that $120,000 of the ward’s discretionary capital funds (“menu” money) be used to paint murals on twenty Metra and CTA underpasses around the ward. After being chosen through the Participatory Budgeting Vote by residents as one of four winning projects that year, the Alderman Joe Moore then issued a call for artists to submit possible designs for the project. This garnered 150 submissions, with the winners chosen by a panel that included local artists and educators from the School of the Art Institute, and Rogers Park’s own Greenleaf Art Center.

Painting of the murals was recently completed and you can click through the gallery below to see how beautiful and varied the winning murals are.

The results are even more impressive to see in person, so consider taking your own Rogers Park Art Tour. Locations for all 20 projects are listed below, and visiting them makes a great outing for some sunny fall afternoon. On a recent Saturday when I took a self-guided “bike tour” of the murals, several residents nodded approvingly as they drove or walked by me taking pictures, and one or two stopped to talk about how cool the paintings are, telling me to make sure I saw their favorite, and describing where to find it. They mentioned what an improvement the murals are, making both the viaducts and their community more beautiful.

With these murals in the 49th ward, the Participatory Budgeting project has provided a way for residents to designate a modest amount of money for a civic improvement project that produces very big results. Not only did “Art = Rogers Park” bring employment to 20 local artists and provide very public exposure for their work, every day it also brings a little more color and enjoyment to the numerous community members and visitors who pass beneath these renewed arches.

For general information on the Participatory Budgeting project in the city of Chicago, visit PBChicago.org.

Residents of wards 22, 45 and 49: the next cycle of PB starts soon! Get involved to make a positive change in your community!

About the Author:
Jenny Baker, GCI Research Assistant: As a second year MUPP student, Jenny works primarily with PB Chicago, assisting with organizing and evaluation of the yearly participatory budgeting processes in many wards throughout Chicago.