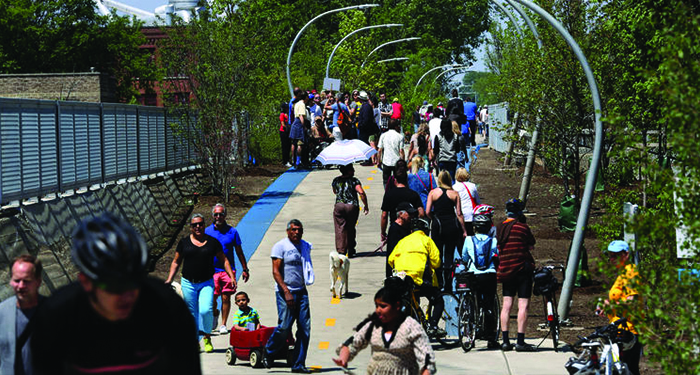 Nancy Stone, Chicago Tribune – The 606 trail in Chicago is filled with people on opening day, June 6, 2015.

In an article about potential gentrification in neighborhoods along the newly opened 606 linear park, the Chicago Tribune quotes Lauren Nolan, economic development planner for CUPPA’s Voorhees Center for Neighborhood and Community Improvement. Nolan says that although rising property values are good for homeowners, only 35 percent of housing units are owner-occupied in Humboldt Park and Logan Square.

Gentrification has been occurring for years on Chicago’s Northwest Side, spreading along the Blue Line tracks toward Logan Square, said Lauren Nolan, economic development planner for the Nathalie P. Voorhees Center for Neighborhood and Community Improvement at the University of Illinois at Chicago.

While it’s difficult to determine The 606’s exact impact on that trend, Nolan said, “any kind of touted amenity” can drive up prices. And though rising property values can be good for those who own property, she said, only about 35 percent of units are owner-occupied in Logan Square and Humboldt Park.

That means renters make up about 65 percent, Nolan said, and they’re particularly vulnerable to being priced out.