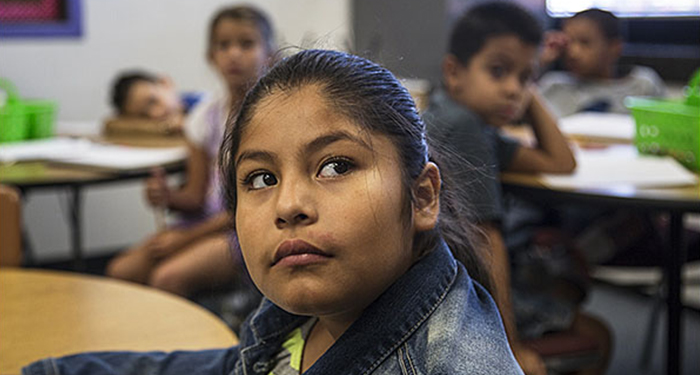 Maritza Fabia, a 3rd grader at Rose Hill Elementary School in Colorado’s Adams 14 school district, listens to her teacher during a Spanish class. The district is under a federal compliance agreement to correct discrimination problems.
—Nathan W. Armes for Education Week

Education Week quotes Amanda Lewis, UIC associate professor of African American studies and sociology, in an article on achievement gaps, discipline disparities and efforts by schools to prevent bias. Lewis, who is director of UIC Institute for Research on Race and Public Policy, is co-author of the upcoming book “Despite the Best Intentions: How Racial Inequity Thrives in Good Schools.”

In one five-year study of a wealthy but diverse suburban district, researchers found school staff members were most likely to act on an implicit bias when they had to make a quick, subjective decision about how to apply school rules and to whom. That was true both for positive choices, such as whom a teacher called on in class, and negative ones, such as which of several misbehaving children to chastise, found Diamond and Amanda E. Lewis, an associate professor in African-American studies and sociology at the University of Illinois at Chicago.

“Race and gender influence whether a student’s action is seen as silly or transgressive, a minor annoyance or in need of intervention,” Lewis and Diamond write in Despite the Best Intentions: How Racial Inequity Thrives in Good Schools, to be published in October by the Oxford University Press.