We want to thank all of you who were able to join us on November 3 for City Cité: A Transatlantic Exchange.  We held the event at the Jane Addams Hull-House and were welcomed by its Director, Jennifer Scott. It was a wonderful day and the weather was nice enough for us to hold lunch outside.  The exchange between the French delegation of scholars, activists, and policy makers and the U.S. participants was rich, addressing issues and strategies in urban regions on both sides of the Atlantic. Thomas Sugrue, our keynote speaker, spoke about the French economist, Thomas Piketty, whose 700 pages treatise analyzes how the dynamics of capital accumulation generate inequality but does not address questions of race.

While the French, Sugrue stated, are comfortable speaking about inequalities based on class, they do not speak much of inequities based on race.  In the United States, he argued, we are less comfortable speaking of class but, in comparison to the French, are more willing to address racial inequalities. These differences, Sugrue pointed out, suggest what the French and the United States Americans could learn from each other.  Indeed, the day was filled with learning. Day 2, City Cité was held at the University of Chicago.  It was a pleasure to join forces with U of C and the Cultural Services of the French Embassy to host this transatlantic exchange. As soon as we have the video footage, we will post it and make it available to you.  We will also be posting some photos very soon.

Great Cities is a welcoming place for international visitors. For the fifth year in a row, a delegation of civic leaders from Russia visited Great Cities Institute to learn about the activities at GCI, The College of Urban Planning and Urban Affairs (CUPPA), and UIC. The visit is organized and supported by Open World Leadership Center (Library of Congress), American Council of Civil Society in Russia, Inc., Moscow School of Civic Education and UIC Great Cities Institute. The Moscow School of Civic Education, a non-governmental organization, was established in 1993 “to promote the development of civil society in Russia.” The delegation will be in the Chicago area for the week. Besides cultural tours and eating the wonderful Chicago cuisines, the group is meeting with various individuals and organizations. Monday, November 9, 2015 they spent the day with us at GCI. Numerous speakers from the University of Illinois at Chicago and the College of Urban Planning and Public Affairs spoke about the work being done at UIC to engage directly with communities and policy makers in the region.  We thank Megan McKenna, GCI Senior Research Specialist, for her work organizing this visit. 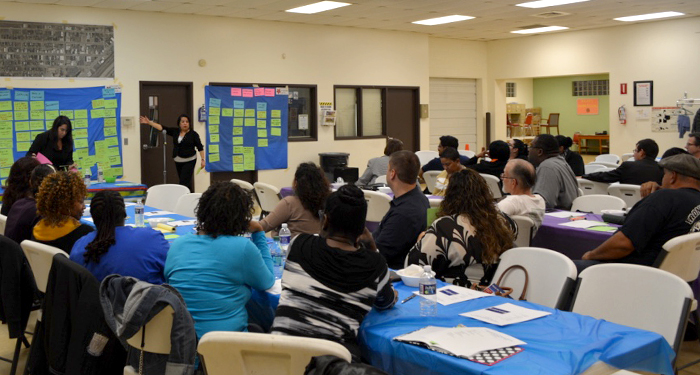 Besides our international partnerships, Great Cities Institute is busy with its community –based planning projects.  This past week, we were so happy to continue our work with the South Chicago Chamber of Commerce and residents in what one resident called “a most constructive first idea-generating public meeting about the revitalization of South Chicago’s commercial corridor.”  During this invigorating community visioning session, residents shared their ideas for a revitalized commercial corridor.  In our next step, we will work with residents to express their ideas spatially.  On the basis of community ideas, we will provide a draft commercial revitalization plan for their review. The final plan will include implementation strategies to assist residents in realizing their dreams for the corridor.

On Friday, November 6, as part of our Public GOOD Initiative with the National Public Housing Museum (NPHM) and in conjunction with the Architecture Biennial, we co-hosted a forum on the “Future of Public Housing.” We might have entitled, the event, “Public Housing as a Public Good.” Other co-sponsors included The Institute for Public Architecture (IPA) and the Temple Hoyne Buell Center for the Study of American Architecture at Columbia University.  The Jane Addams Hull-House Museum hosted the event. Several participants came from New York City, including Rasmia Kirmani Frye, Director of Public/Private Partnerships, New York City Housing Authority, and Nadine Maleh, Executive Director, Institute for Public Architecture, who moderated the discussion. I provided opening comments on affronts to the “public” and the importance of the concept of the public good. Stay tuned for more programming from GCI and NPHM on our pubic good initiative.