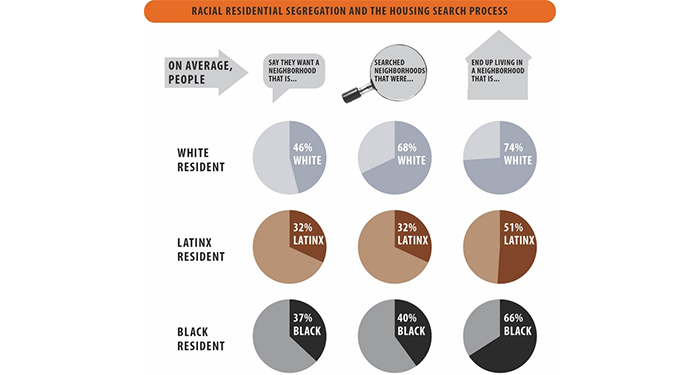 Photo by Institute for Research on Race and Public Policy, University of Illinois at Chicago

A Crain’s Chicago Business article examines the finding from a UIC Institute for Research on Race and Public Policy report that Cook County black households that earn $100,000 or more annually are nearly as likely as those earning under $25,000 to be segregated from whites. UIC experts interviewed in the article are Kasey Henricks, report co-author and postdoctoral associate in the institute, and Maria Krysan, report contributor and professor and head of sociology.

In Cook County, affluent black people are more likely to live near poor blacks than near white people of their income level—or any income level—according to a new study from the University of Illinois at Chicago.

“This tells us that racial inequality is its own independent thing, separate from income,” said Kasey Henricks, a co-author of the study, which was released May 15. “It’s not true when people say the continuing segregation in Chicago is the consequence of wealth dynamics and not necessarily the pattern of racial dynamics.”

Henricks, a postdoctoral research associate at UIC’s Institute for Research on Race & Public Policy, wrote the study with Amanda Lewis, the institute’s director and a professor of African-American studies. Titled A Tale of Three Cities: The State of Racial Justice in Chicago, it uses data to highlight the different conditions of the black, white and Latino populations of Cook County on health, education and other attributes, including housing.