A biker races past a mile marker along the 606 Trail making his presence known, “on your left!”  A young Latina mother in workout gear pushes a stroller with an infant while her adolescent child wheels alongside them on his scooter.  Other bikers whiz by, joggers jog and power walkers get their workouts in.  This was the scene on my walk along the west end of the elevated 606 the weekend prior to our panel convening on “The Impact of Infrastructure on Communities: Three Rail-to-Trail Projects” at the UIC Great Cities Institute.

Convened on September 19th, the panel was kicked off with statements from Jamie Simone, previously a Director with the Trust for Public Land, highlighting the community engagement process and taking lessons learned from the High Line in NYC and the 11th Street Bridge Project in Washington, DC.  After describing TPL’s lead role from reaching out to community groups to spreading awareness to nearby residents, she concluded that a 606 street festival takes place each June to celebrate both the 606 and the community it serves. 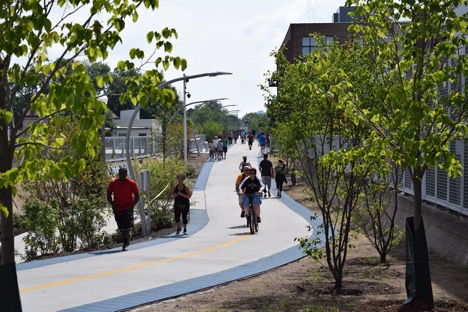 Recent photo along the 606 Trail

Geoff Smith was next, highlighting data published through the DePaul Institute for Housing Studies, which he leads as Executive Director.  Notably, housing prices along the west end of the trail have spiked 48% since the trail opened.   This opened up the conversation on both the benefits and the unintended consequences of constructing a community amenity in a neighborhood starved for green space.  The local green space issue partially solved, displacement of long-time residents from increased taxes and rents has emerged as a reality, and one not yet fully addressed even if the data has been compiled. 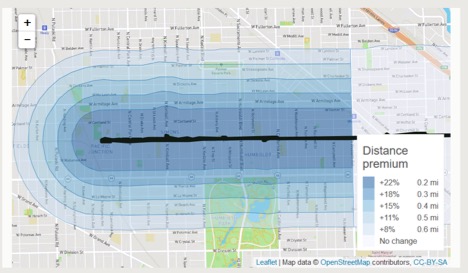 DePaul Institute for Housing Studies Map showing increase in housing prices since the opening of the 606 Trail.

After my own discussion on strategies to combat displacement, Antonio Lopez gave forceful statements on the lack of coherent process or distribution of benefits from Chicago’s infrastructure projects.  “Environmental justice is about human rights,” noted Dr. Lopez, former Executive Director of the Little Village Environmental Justice Project, referencing the planned development of a trail through Pilsen and Little Village that he believes does little to remedy the brownfields and pollutants left behind by the closing of the Crawford and Fisk coal plants.  Dr. Lopez also took to task the name of the planned trail: the “Paseo,” which was put forward from city hall and not from LVEJO or other community members that originally envisioned the project over a decade ago.

Anton Seals, Executive Director of Grow Greater Englewood was just as direct, stating “government and the private sector have retracted from black communities.”  Citing the lack of job opportunities, endemic crime and violence, and indifference from government, an Englewood Trail is likely not top of mind to most south siders.  Seals noted that in his free time, he is a barber to young men in Englewood whose daily anxieties leave them living transactional lives- “I’m gonna get mine today because I might not be here tomorrow.”  This mindset is perpetuated when City leaders forego the work of engaging them to plan for important community amenities like the Englewood Trail.

The hopes of the panel were that communities along the Paseo and the Englewood Trails, if built, will benefit from the lessons learned from the 606 which is used by diverse sets of peoples but which has accelerated housing pressures to long-time, working-class neighbors.  At LUCHA, where I serve as Executive Director, we responded to the housing pressures with three strategies:

Strategy 1: Tierra Linda Affordable Housing Development– anticipating housing pressures, LUCHA purchased 6 vacant lots and were donated 6 city-owned lots, each near the west end of the 606 Trail, to construct 45 units of affordable housing, now under construction through the Low Income Housing Tax Credit Program.  This development will also feature one of the most energy efficient buildings in the Midwest, called a Passive House, to match the Health and Wellness theme inspired by uses of the 606.

Strategy 2: 606 Preservation Ordinance– seeing the demolition and de-conversion of 2-flat, 3-flat and 4-flat buildings (Chicago’s most naturally affordable units) replaced by luxury condos and single family homes, LUCHA partnered with Logan Square Neighborhood Association (“LSNA”), Friends of the Bloomingdale Trail and DePaul’s IHS to increase demolition fees to up to $500,000 per unit to go into a trust fund to preserve affordable housing in a 606 Pilot Area.

This ordinance was introduced to City Council in May 2017, but has been supplanted by a Mayoral proposal to amend the Affordable Rents Ordinance, which many believe may not go far enough to stem the tide of displacements.  See Columbia Chronicle article.

Strategy 3: Preserving local enterprise– Partnered with LSNA, Enterprise Community Partners and the SPARCC/L-Evated Chicago team, LUCHA contemplated the displacement of local businesses that have followed the out-migration of working-class, and particularly Latino households, including from the demolition of the Mega Mall.  The collaboration is resulting in programming like “Push Cart Socials,” youth mural projects celebrating street food vendors and other tech-based projects to encourage local enterprise among Latino youth.

Recently, a LUCHA tenant described how she sends her kids to school down the 606 Trail on their bikes and skateboards, because it’s much safer than navigating Chicago’s busy streets.  Rails-to-trails projects like the 606 have given communities a celebrated health and wellness amenity, much needed local green space and an informal transportation corridor.  But the question remains, without robust planning with long-time neighbors, who will be left in the community to enjoy it? 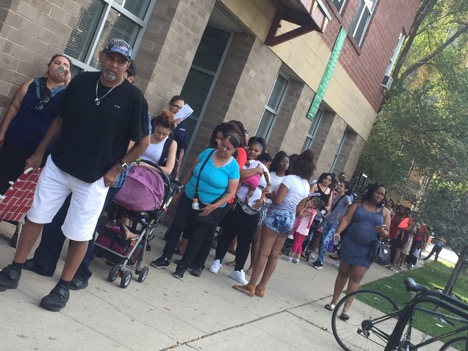 521 Families lined-up over an 8-hour period in 90 degree weather to sign up for Tierra Linda Affordable Housing units, which will be along the 606 Trail.