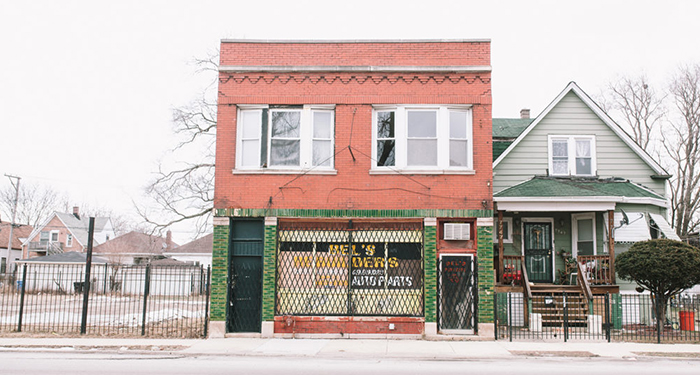 A view of the Auburn-Gresham neighborhood on Chicago’s South Side. The city’s black population is on track to shrink to 665,000 by 2030 — down from a peak of about 1.2 million, according to the Urban Institute. (Danielle Scruggs for Here & Now)

Teresa Córdova, director of the UIC Great Cities Institute and professor of urban planning and policy, is interviewed by National Public Radio & WBUR-FM’s “Here and Now” in a story on Chicago’s declining African-American population.

Chicago has seen a decrease in its overall population since 1950, but the trend has been driven lately by African-Americans, who have seen their population decline by 33 percent in that time, according to Teresa Córdova, director of the Great Cities Institute at the University of Illinois Chicago.

“In a lot of these neighborhoods where we’re seeing the largest decline, those are also neighborhoods where you have a lot of job loss, particularly since 1975,” Córdova says. “Along with that job loss you saw disinvested neighborhoods with declines in anchor institutions — the corner grocery stores, even schools. So overall in these conditions of disinvestment, people are weighing their options.”

The segment’s audio and a related online story are available here.