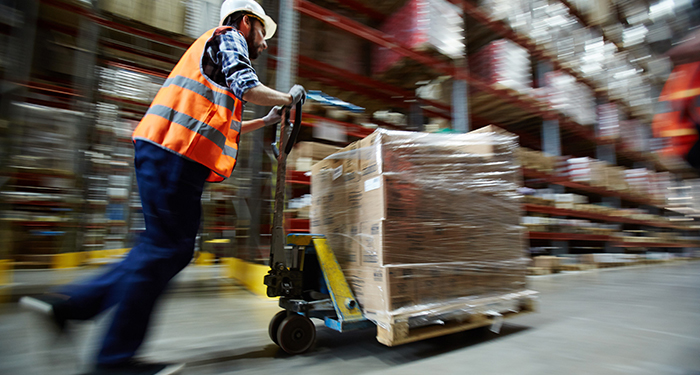 The following is a guest blog by GCI Senior Research Specialist Beth Gutelius on the release of a new report authored by her along with Nik Theodore, Ph.D. This blog is concurrently posted on Medium.

Technology has changed the way many people shop, fueling the meteoric growth of e-commerce. With a click, customers now expect a box filled with any number of goods to arrive at their doors — sometimes the very same day, a sea change from even a few years ago. While some of the ripple effects of e-commerce are more obvious — like the army of last-mile delivery drivers on the streets — others are largely hidden from view, tucked away in cavernous buildings in industrial parks, where warehouse workers hustle to assemble orders. The pressure to meet quick order turnaround, driven largely by Amazon’s standard-setting delivery promises, has contributed to onerous labor conditions in warehouses across the country, conditions that appear poised to worsen in the coming years.

In a report published today with Nik Theodore, Ph.D., professor of Urban Planning and Policy at the University of Illinois at Chicago, and commissioned by the UC Berkeley Labor Center and Working Partnerships USA, we examined how technological changes in warehouses across the United States might impact workers and reshape the nature of warehouse work.

Over one million people work in warehouses across the U.S., a number that is growing due in part to the rise of e-commerce. The industry is the invisible backbone of the economy: almost everything we buy passes through a warehouse at some point in its journey. Yet we rarely think about them, or the workers inside. To understand how technology might be used in warehouses and the potential impacts on jobs, we explored the decision-making factors warehouse operators face for insights into what the future may hold. We interviewed warehouse operators, management consultants, and technology providers; attended industry conferences; and reviewed current literature and data on the warehousing industry. Here’s what we found:

In contrast to the seemingly endless stream of reports predicting widespread job loss due to automation, our study shows that over the next decade job quality–not quantity–is a far more pressing concern. That is, the working conditions and content of warehouse jobs are likely to change, with potentially negative impacts on workers. We identified three main categories of potential shifts in the content of workers’ jobs: work intensification, algorithmic management, and de-skilling.

Warehouse work tends to be hard on workers’ bodies. Some new technologies could reduce the most grueling parts of the job, like walking or awkward lifting positions. Our research found, however, that these potential improvements in job quality will likely be coupled with increases in the pace of work, which could lead to a net deterioration of working conditions. For example, Amazon’s MissionRacer video game pits workers against each other to see who can assemble orders the fastest. Algorithms that govern the pace of work can increase pressure to work quickly, introducing new forms of workplace control and surveillance, where the monitoring of workers’ performance is granular, scalable, and relentless. These technologies are critical in the push for speed-ups. Wearable devices and sensors track workers in new ways, and can take away their autonomy and flexibility.

De-skilling is the process of breaking up a job into smaller bits of work and figuring out which activities to simplify or to which technology could be applied. For example, some autonomous mobile robots lead workers across a warehouse, choosing walk routes, pacing the worker’s speed, and simplifying the process of picking an order. These robots can remove nearly all decision-making on the part of workers, which for employers means you can hire just about anyone to do it–including temporary workers. For workers, it could lead to lower wages and more job insecurity.

Taken together, these changes in warehouse work could lead to an increase in health and safety issues, as well as increased employee turnover due to overwork and burnout. Currently, people working in warehouses experience work-related injuries at a rate nearly twice that of other private industry workers – higher than construction, coal mining, and most manufacturing industries. Health and safety impacts could intensify as workers are incentivized to increase their pace of work via new technologies like gamification and monitoring.

And we have to remember that any increase in risks on the job will be felt unevenly — according to Census data, 66% of front-line workers in warehouses are people of color, despite making up only 37% of the overall labor force. In particular, changes in warehouse working conditions, including those that could lead to chronic pain and psychological stress, could disproportionately affect Latinx and Black communities, with persistent, long-term impacts.

What is driving these trends and the transformation of the warehousing industry is e-commerce. The combination of labor-intensive e-commerce order picking and the speed with which these orders must be shipped is motivating experimentation with new technologies. The effects of Amazon are visible across the industry, as companies clamber to find ways to compete and many look to new technologies to gain efficiencies.

Despite our concerning findings, we do not believe warehouse workers are necessarily doomed — if we can break out of the commonly-held notion that the path of technological change is inevitable. Technology is neither inherently good nor bad. Humans create technologies, and our biases get baked in on the front end; and humans can exercise choices about how technologies get implemented and overseen. We will need bold, creative thinking about how to ensure both innovation and shared prosperity, and what roles policymakers, employers, and workers need to play to shape the trajectory of technological change.

Warehouse operators stand to benefit significantly from new technologies, but it’s critical that these gains be shared, that workers be involved in identifying which efficiencies should be prioritized and what hazards are being introduced, and that experimentation unfolds with regard to for more than just productivity increases. Absent this, the process of technological change in warehousing will resemble a win-lose proposition, where the short-term benefits are captured by the industry and the long-run costs are borne by workers.

Beth Gutelius is senior research specialist at the Great Cities Institute. Her academic and consulting career has focused on urban economic development and the changing nature of employment. Her research examines the structure of the fissured logistics industry and its evolution, both in Chicago and nationally. As an advisor and research consultant to philanthropic organizations, Beth has worked with the MacArthur Foundation, Ford Foundation, Irvine Foundation, Solidago Foundation, and the Neighborhood Funders Group, along with many non-profits.