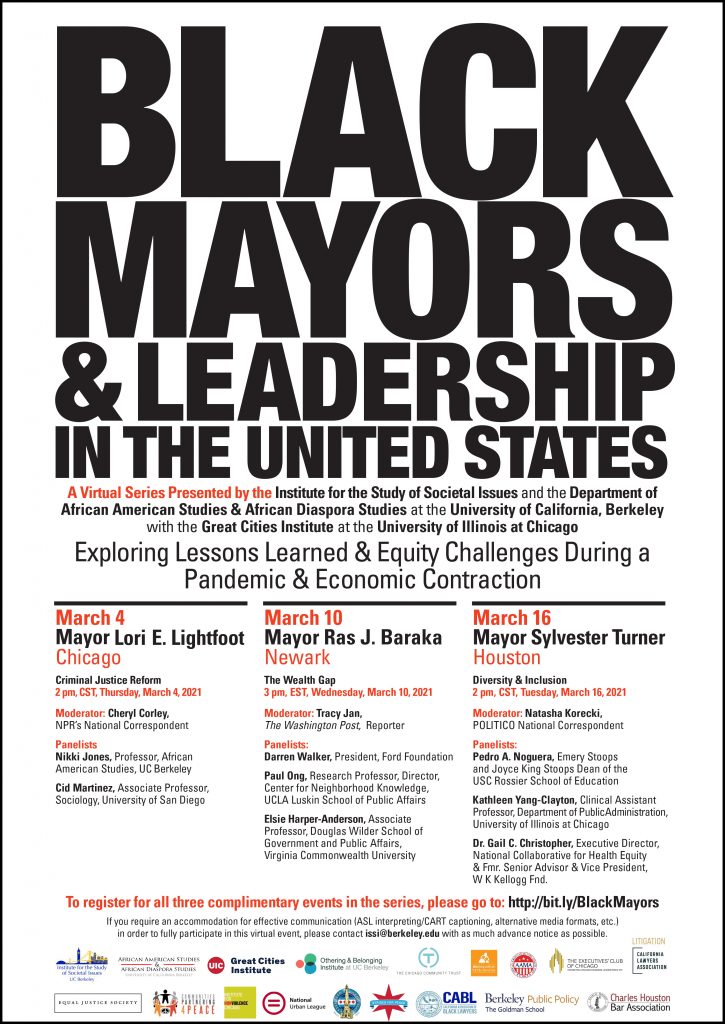 Join us for a virtual series of conversations taking place on March 4, March 10, and March 16 on major issues facing the nation and highlighting Black mayors’ roles as leaders in the United States. Chicago Mayor Lori Lightfoot will speak on criminal justice reform, Newark Mayor Ras Baraka will speak on the wealth gap, and Houston Mayor Sylvester Turner will speak on diversity and inclusion.

Given the lack of national leadership in the past four years and the sharpening crises of our times, Black mayors in the United States have stepped in to fill the vacuum, taking on roles they didn’t bargain for, but embracing the opportunity to make a difference for their cities. The key elements of this leadership — and the major obstacles that it seeks to overcome — are the focus of this virtual series.

These three major-city Black mayors will share their insights, strategies and tactics into the policies, practices and programs that have been most effective under their leadership and will describe the alliances and partnerships they have built. The series, presented by the Institute for the Study of Societal Issues and the Department of African American Studies at the University of California, Berkeley, in conjunction with the Great Cities Institute at the University of Illinois at Chicago will feature conversations moderated by nationally recognized journalists, with scholars discussing issues raised by these mayors.

Register for the Zoom conversations at https://issi.berkeley.edu/BlackMayors

Along with the Great Cities Institute, the series is hosted by:

The Institute for the Study of Societal Issues, part of the University of California, Berkeley, fosters innovative, community-engaged, qualitative and quantitative interdisciplinary research on the issues central to social stratification and inequality. The primary focus is on institutional patterns that impact marginalized communities – in the United States and around the world – as well as social and political movements that disrupt such patterns. ISSI trains, advises, mentors and supports the next generation of social change scholars to identify and collect empirical data so as to interpret and explain social stratification, with significant attention to the processes that support and disrupt stratification. Founded in 1976 as the Institute for the Study of Social Change, ISSI was the first institute in the University of California system to focus on race, stratification and social change.

The Department of African American Studies at the University of California, Berkeley, is an intellectual community committed to producing, refining and advancing knowledge of Black people in the United States, the Caribbean, Latin America, Europe and Africa. A key component of the department’s mission is to interrogate the meanings and dimensions of slavery and colonialism, and their continuing political, social and cultural implications.

UIC Great Cities Institute is a research hub for scholars, policymakers, and stakeholders who share an interest in finding answers to the question of how cities and regions can make themselves into great places. The Great Cities Institute represents UIC’s commitment to “engaged research” while contributing to its stature as a Research One University thereby highlighting the value of quality research for addressing today’s urban challenges. GCI’s goal is to improve the quality of life of residents living and working in Chicago, its metropolitan region, and cities throughout the world.

The series is co-sponsored by: