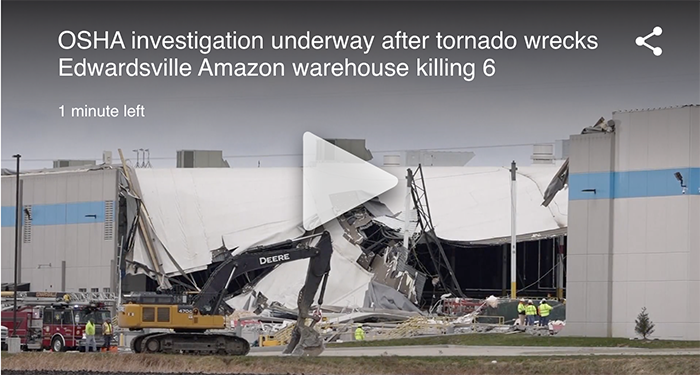 An Associated Press report on the tornado striking an Amazon delivery center in southern Illinois last week features analysis from Beth Gutelius, research director for the Center for Urban Economic Development at UIC and senior research specialist with the Great Cities Institute at UIC, who addresses workplace safety issues, the potential impact of climate change on the warehouse industry, and American consumer demand for fast shipping. Her comments also appeared in related coverage from Newsweek and PBS.

“We don’t think of warehousing as one of the industries that’s going to be severely impacted by climate change but then you have a case like this,” said Beth Gutelius, research director at the Center for Urban Economic Development at the University of Illinois-Chicago. “How do we make sure the facilities are built in a way to best protect the workers inside?”

Gutelius said its central location and cheaper costs has led the warehouse industry to triple over the past decade in the greater St. Louis area, of which Edwardsville is a part, growing faster than the industry nationwide.

Gutelius said she couldn’t help but view the tragedy as a spillover effect of American consumer demand for getting packages shipped quickly.