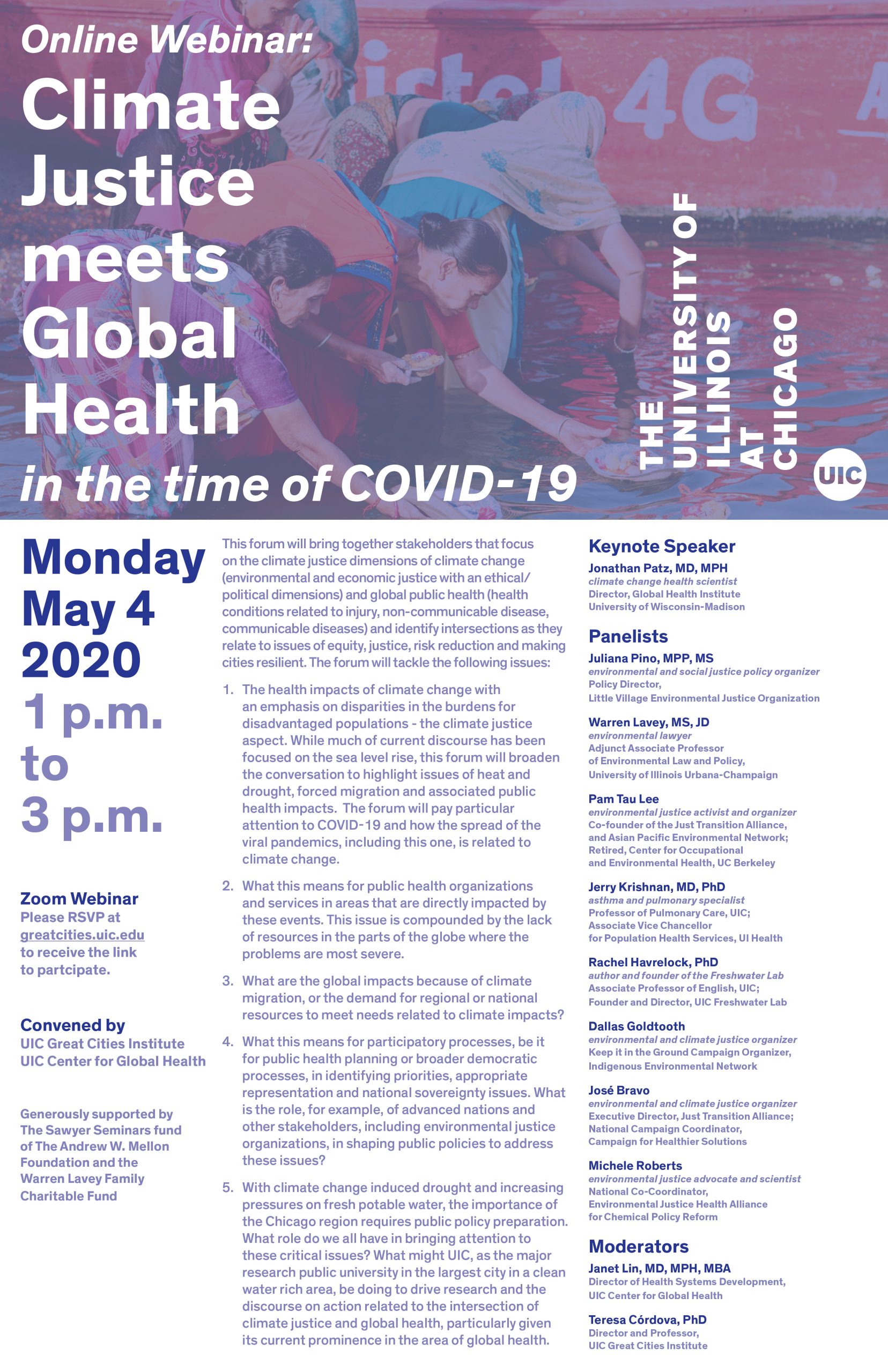 This event is moving online to a Zoom webinar. To receive the link to participate, please RSVP below.

Jonathan Patz, M.D., MPH, is director of the Global Health Institute at the University of Wisconsin-Madison. He is a professor and the John P. Holton Chair in Health and the Environment with appointments in the Nelson Institute for Environmental Studies and the Department of Population Health Sciences. For 15 years, Patz served as a lead author for the United Nations Intergovernmental Panel on Climate Change (or IPCC)—the organization that shared the 2007 Nobel Peace Prize with Al Gore. He also co-­chaired the health expert panel of the U.S. National Assessment on Climate Change, a report mandated by the U.S. Congress.

Juliana Pino is the Policy Director at the Little Village Environmental Justice Organization (LVEJO). Born in Tuluá, Colombia, and raised in both Colombia and the United States, Juliana’s personal life is transnational and her background is interdisciplinary. At LVEJO, Juliana analyzes, researches, and advocates for environmental justice, climate justice, and economic justice in local, state, and federal environmental policy. LVEJO’s campaigns cross many areas, including energy, food, water, air, land use, brownfields, toxics, transportation, workforce development, and others. Her work focuses on: advancing energy democracy and community self-determination in regulatory and policy arenas; creating just transition with meaningful collaborative and participatory management of shared environmental resources; and centering frontline community leaders as generators of transformative policy ideas and governance models.

Warren Lavey is an adjunct associate professor at the University of Illinois, teaching environmental law and policy in the College of Law and Campus Honors Program in Champaign, and in the School of Public Health in Chicago.  He trains health, law and other students on climate competencies and policy advocacy.  After practicing law in the federal government and a global law firm for 30 years, he advises government agencies and nonprofit organizations on sustainability programs and policies.  He earned undergraduate and graduate degrees in law and applied mathematics from Harvard University, and a graduate degree in economics from Cambridge University.

Jerry Krishnan is Associate Vice Chancellor for Population Health Services of the University of Illinois Health system and Professor of Pulmonary Care at the University of Illinois at Chicago with expertise in the care of patients with asthma, chronic obstructive pulmonary disease and other lung disorders. He is a principal investigator of multiple clinical trials supported by grants from the National Institutes of Health and the Patient-Centered Outcomes Research Institute that focus on identifying the most effective treatments and educational and support programs to improve health outcomes for patients with pulmonary disorders. Krishnan was chairman of of the Pulmonary-Allergy Drugs Advisory Committee for the U.S. Food and Drug Administration. He is a member of the National Committee for Quality Assurance Respiratory Measurement Advisory Panel, and the National Heart, Lung, and Blood Institute’s Clinical Trials Review Committee.

Rachel Havrelock is an Associate Professor at the University of Illinois at Chicago, co-founder of the UIC Freshwater Lab, and author of River Jordan: The Mythology of a Dividing Line (University of Chicago Press, 2011). After writing about how the conflicted borders of the Israeli-Palestinian conflict formed and congealed in Palestinian and Israeli cultures for River Jordan, Rachel became invested in water sharing as an approach to Middle East peacemaking. Havrelock’s current book project, Pipeline: How Oil Created the Modern Middle East and How Water Can Transform It, chronicles the role of oil extraction and infrastructure in the militarization of the Middle East and suggests how regional water management could transform the landscape.

Pam Tau Lee, Asian American elder activist and organizer and retired from the Center for Occupational and Environmental Health, UC Berkeley. She was a participant at the People of Color Environmental Leadership Summit in 1991 and a contributor to the Principles of Environmental Justice. She is a co-founder of the Just Transition Alliance, Asian Pacific Environmental Network, Chinese Progressive Association and a representative to the Grassroots Global Justice, Rising Majority and current chairperson of the International Coalition for Human Rights in the Philippines.

Dallas Goldtooth (Mdewakanton Dakota and Dine) travels extensively across Turtle Island to help fossil fuel and hard rock mining impacted communities tell their stories thru social media, video, and other forms of communication. Dallas is an Indigenous Environmental Network (IEN) media team lead, working with IEN staff, board, and organizational partners from a diverse group of climate justice networks. Along with his many tasks and duties with IEN, he is also a Dakota cultural/language teacher, non-violent direct action trainer, and was one of the outstanding Water Protectors at Standing Rock/Oceti Sakowin Camp fighting the Dakota Access Pipeline. In addition, he is a co-founder of the Indigenous comedy group, The 1491s, a poet, journalist, traditional artist, powwow emcee, and comedian.

José Bravo is the Executive Director for the Just Transition Alliance (JTA), where he works directly with Environmental Justice (EJ) Communities and Labor (organized and unorganized) to develop best practices and build meaningful and impactful alliances. José is also the National Campaign Coordinator of the Campaign for Healthier Solutions (CHS), a community driven campaign towards healthier discount stores. Bravo’s work in social justice issues is rooted from his upbringing in the Southern California fields alongside both his parents. Bravo has also been doing work on immigrant rights issues since his days as a student organizer in the 80’s to the present. His participation in the Environmental Justice (EJ) movement since 1990, has over the years gained him recognition as a national and international leader in the EJ movement and founding member and national and international leader in the Just Transition Movement.

Michele Roberts has provided technical assistance and advocacy support to communities regarding the impacts of toxins on human health and the environment for over 20 years. She also is a spoken word artist, who created Arts Slam @ SsAMS, a community-based arts program created to advance social justice. She is a proud graduate of an Historically Black College and University. Prior to serving as an advocate, Michele worked as an environmental scientist in the government. She currently serves as the national Co-Coordinator of a National Coalition known as the Environmental Justice and Health Alliance for Chemical Policy Reform. The Environmental Justice and Health Alliance for Chemical Policy Reform is a national, intergenerational grassroots coalition of over 30 groups in 13 states and includes supportive allies such as National Black Farmers Association, National Indian Farmers Association and National Womens Farmers Association in the US.