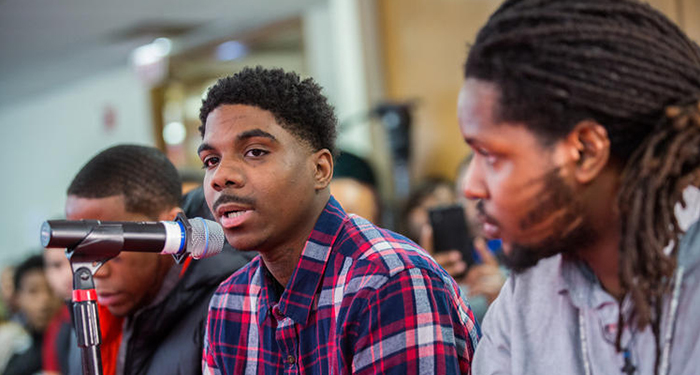 In the city of Chicago, 47 percent of black males between the ages of 20 and 24 are out of work and out of school. This is just one of the many disturbing numbers that can be found in the Great Cities Institute report released today at the Chicago Urban League by the Alternative Schools Network.  In a hearing before elected officials, UIC’s Great Cities provided highlights of the report entitled, Lost: The Crisis of Jobless and Out of School Teens and Young Adults in Chicago, Illinois, and the U.S.

Teresa Córdova, GCI Director, made the point that for young people of color, especially young Blacks, conditions of joblessness are Chronic, Concentrated and Comparatively worse (comparing to Illinois, U.S. Los Angeles and New York).  Looking at data from 2005 to 2014, low rates of employment and high rates of joblessness have persisted over time.  Furthermore, “The low rates of employment are spatially concentrated in neighborhoods that are also racially segregated” (19).

Where the “permanent scars” lead to conditions that are both a consequence and a precipitating factor that leads to further youth unemployment and parallel social conditions (19).

Some of these conditions include decreased work later in life, lower wages, teenage pregnancy, poverty,

…Where feelings of low self-esteem, depression, and powerlessness are often accompanied by substance abuse and in many cases, violence and crime (19).

This report is a powerful supplement to the voices of young people who spoke today at the hearing sponsored by the Alternative Schools Network, along with the Chicago Urban League, The Illinois Black United Fund, The Westside Health Authority, The Chicago Area Project, and Youth Connection Charter School. Those voices are clear: young people want to work.  Many of the young people at the hearing spoke about their financial responsibilities in the household, how they help out their families and the difficulties when they don’t have a job. They also spoke about the value of having a job not only to provide income, but also because of what they learn.  We heard so many of them say, “Having a job is important to me.” Many spoke directly about the importance of employment for providing an alternative to the streets, “Jobs can solve violence.  If you are busy working, you won’t have time for violence.”

One young black man said, “I’m not asking for sympathy, it’s just my reality.”  But in all the stories of their realities, these young people also spoke of wanting a future, not wanting to be a statistic, and having dreams for a better life.

In the last paragraph of the Great Cities Institute report, we are reminded,

Chicago is a great city.  But how can it truly be great when this “tale of two cities,” provides such a stark comparison in the employment opportunities among young people. This report [and the voices of the young people themselves] reminds us of the urgency to address these issues of chronic and concentrated conditions of limited employment opportunities that not only affects the young people themselves, but their families, households, and neighborhoods.  The reverberations surely extend to all aspects of our society.

4 Responses to “Young, Black, and Out of Work”