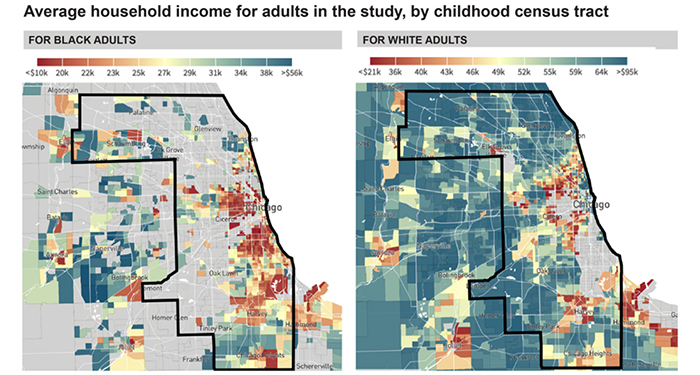 These maps show the average household income for adults in the study who were raised in various census tracts across Cook County. Income for whites studied was significantly higher than for African-Americans.

Matt Wilson, a senior research specialist at UIC’s Great Cities Institute, are among the featured experts cited by the Chicago Tribune in its local breakdown of the Opportunity Atlas, an interactive map of various outcomes — from income levels to rates of incarceration and teen pregnancy – for people born between 1978 and 1983 and details their chances of upward mobility by the neighborhoods of their youth. Wilson notes that the data reflects the deeply entrenched, generation-to-generation poverty that hasn’t changed for decades in certain parts of Chicago.

To UIC researcher Matt Wilson, the data reflect a sad reality: deeply entrenched poverty in certain parts of the city.

“What’s discouraging is that, if you grew up in these neighborhoods, we know what your life trajectory was. But we still know in 2016, a lot of these issues are still the same,” said Wilson, a senior research specialist at UIC’s Great Cities Institute.