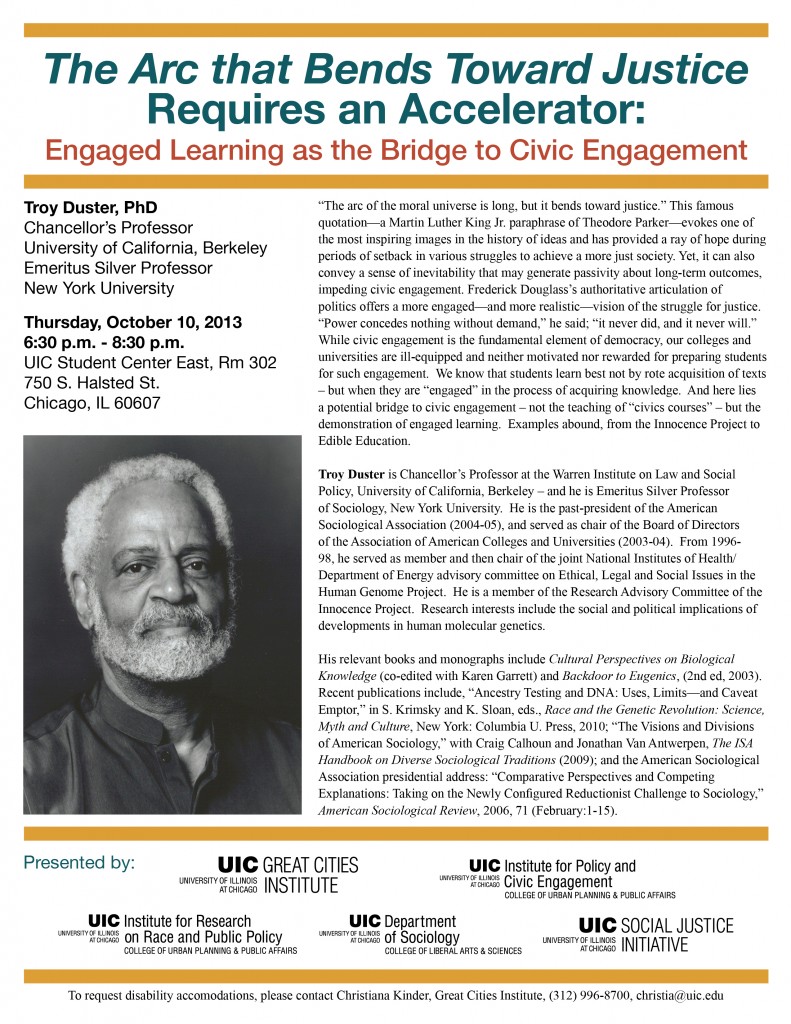 “The Arc that Bends Toward Justice Requires and Accelerator: Engaged Learning as the Bridge to Civic Engagement”

“The arc of the moral universe is long, but it bends toward justice.” This famous quotation—a Martin Luther King Jr. paraphrase of Theodore Parker—evokes one of the most inspiring images in the history of ideas and has provided a ray of hope during periods of setback in various struggles to achieve a more just society. Yet, it can also convey a sense of inevitability that may generate passivity about long-term outcomes, impeding civic engagement. Frederick Douglass’s authoritative articulation of politics offers a more engaged—and more realistic—vision of the struggle for justice. “Power concedes nothing without demand,” he said; “it never did, and it never will.”  While civic engagement is the fundamental element of democracy, our colleges and universities are ill-equipped and neither motivated nor rewarded for preparing students for such engagement.  We know that students learn best not by rote acquisition of texts – but when they are “engaged” in the process of acquiring knowledge.  And here lies a potential bridge to civic engagement – not the teaching of “civics courses” – but the demonstration of engaged learning.  Examples abound, from the Innocence Project to Edible Education.

Troy Duster is Chancellor’s Professor at the Warren Institute on Law and Social Policy, University of California, Berkeley – and he is Emeritus Silver Professor of Sociology, New York University.  He is the past-president of the American Sociological Association (2004-05), and served as chair of the Board of Directors of the Association of American Colleges and Universities (2003-04).  From 1996-98, he served as member and then chair of the joint National Institutes of Health/Department of Energy advisory committee on Ethical, Legal and Social Issues in the Human Genome Project.  He is a member of the Research Advisory Committee of the Innocence Project.  Research interests include the social and political implications of developments in human molecular genetics.