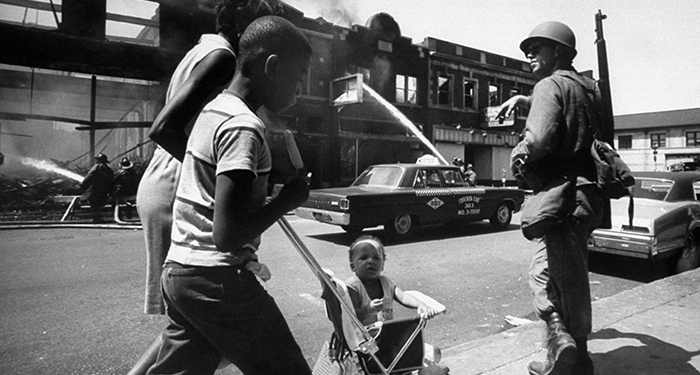 In light of the recent protests and outrage against the killing of George Floyd by a Minneapolis policeman as well as continuing police brutality, especially in black communities, we are reminded both of the Kerner Commission Report and the March 2018 Great Cities Institute event to commemorate the 50 years since its release.

In the aftermath of the 1967 urban ‘riots’, President Lyndon B. Johnson established the National Advisory Commission on Civil Disorders, known as the Kerner Commission after its chair, Governor Otto Kerner, Jr. of Illinois. The 11-member commission examined the conditions of the cities that led to the turmoil and made recommendations addressing the underlying causes. The Commission’s report, released on February 29, 1968, marks a pivotal moment in the changing dynamics of U.S. cities and of critical analysis of the role of race as a division in America.

As part of the work of the Commission, members went to communities where the ‘riots’ had occurred, talked to people and saw conditions firsthand. A group of young males in Milwaukee, for example, said to them, “Get us a job, baby; we need jobs, baby.” The issue of jobs became “a central theme in our findings and recommendations,” said Fred Harris, the last remaining member of the Commission who was the keynote speaker at the Great Cities Institute event.  As the former Oklahoma Senator shared stories of how the Kerner Commission came about, he also highlighted some of its findings:

Our basic and most famous finding was “our nation is moving toward two societies one black one white – separate and unequal.”

The report stated further “segregation and poverty have created in the racial ghetto a destructive environment totally unknown to most white Americans,’ and added ‘what white Americans have never fully understood but what the Negro’ – as we said it – ‘but what the Negro can never forget is that white society is deeply implicated in the ghetto. White institutions created it, white institutions maintain it and white society condones it.”

“Great and sustained national efforts were required” we said, “not only to combat racism but also to greatly expand social programs including those against unemployment and low wages, poverty, inferior or inadequate education and training, lack of healthcare, and bad or nonexistent housing.”

The report also made strong recommendations for improving the conduct of the media and the police and for needed integration of housing and schools. These recommendations applied to all Americans, ‘rural and urban, white, black, Spanish surname as we said then American Indians and all minorities.

But unfortunately misinformed about its content and distracted by the Vietnam war President Johnson rejected the current report.

Senator Harris also discussed conditions since the report and suggested strategies that are known to work.

Some improvement has occurred…but regression has been the trend since the mid-1970s and that’s true today. There is still far too much excessive force by police; too often deadly force, especially against African Americans.  White supremacists have become bolder and more violent.  Housing and schools have been rapidly re-segregated locking too many African Americans and Latinos into slums and their children into inferior schools.

As the nation has grown, as our overall poverty rate has stubbornly remained virtually the same percentage rate while the total number of poor people in America has increased from a little over 25 million to a little over 40 million by 2016.

Ever since the 1970s, the African American unemployment rate has continued to be about double that for whites and Latino unemployment continues high as well.

Labor union membership has shrunk from about 25 percent of private jobs to about 6 percent.

Inequality of income in our country has greatly worsened.  In the 1970s, for example, the richest 1 percent of Americans took home something less than 9 percent of total national income, but by 2016, they took home 24 percent.

Fifty two percent of all new income in America has gone to the top 1 percent.

So where do we go from here?

Strengthening unions and removing the legal or other barriers, which impedes the right of workers to organize

Raising the minimum wage to a living wage, which would be a giant boost to the economy and bump up middle class wages too.

We need more affordable housing, and housing and schools integrated by income and race.

We also need re-regulation of big banks and big finance.

Better incomes for those who can’t work; and who can’t find work

A sound, free public education for all from early childhood through college

The basic American principles of equal rights and equal opportunity for all whatever their social standing, income, zipcode, gender or color

Investment in infrastructure, in science and alternative energy, technology, investment in ourselves

“How can we get these things done when political times are so tough,” he asks. He goes on to talk about the things in which we can take heart including the legacy of courageous individuals who fought for civil rights and “persisted and prevailed” and in the fact that polls show that the majority of Americans support “those policies that we must now adopt.”  He also states,

We can take heart that we live in a time of unprecedented, growing and powerful people’s activism.

And quoting Reverend Barber of North Carolina he says,

“We can’t keep fighting in our silos.  No more separating issues…The same people fighting one of us, should have to fight all of us together.

And so we find ourselves in a time when our very survival – our democracy, our ability to live in health reaping the wealth of our labor, and indeed our ability to live on this planet – all depend on all of us coming together to bridge the gap between our espoused principles with the realities of our conditions.

Please revisit the video – filmed by public access television, CANTV – to view the Great Cities Institute commemoration of the 50th Anniversary of the release of the National Advisory Commission on Civil Disorders’ Kerner Commission Report.

Following the presentation by Senator Harris was a panel discussion with noted historian and Chicago civil rights activist Timuel Black who was joined by former mayor of Berkeley and human rights activist Eugene “Gus” Newport, former vice president of the W K Kellogg Foundation, Dr. Gail Christopher. Also included on the panel were local activists and community builders: José Lopez of the Puerto Rican Cultural Center, Willie J.R. Fleming of the Chicago Anti-Eviction Campaign, and Anthony Lowery of the Safer Foundation.  It is a remarkable panel filled with fodder for our continuing conversation on where we go from here.